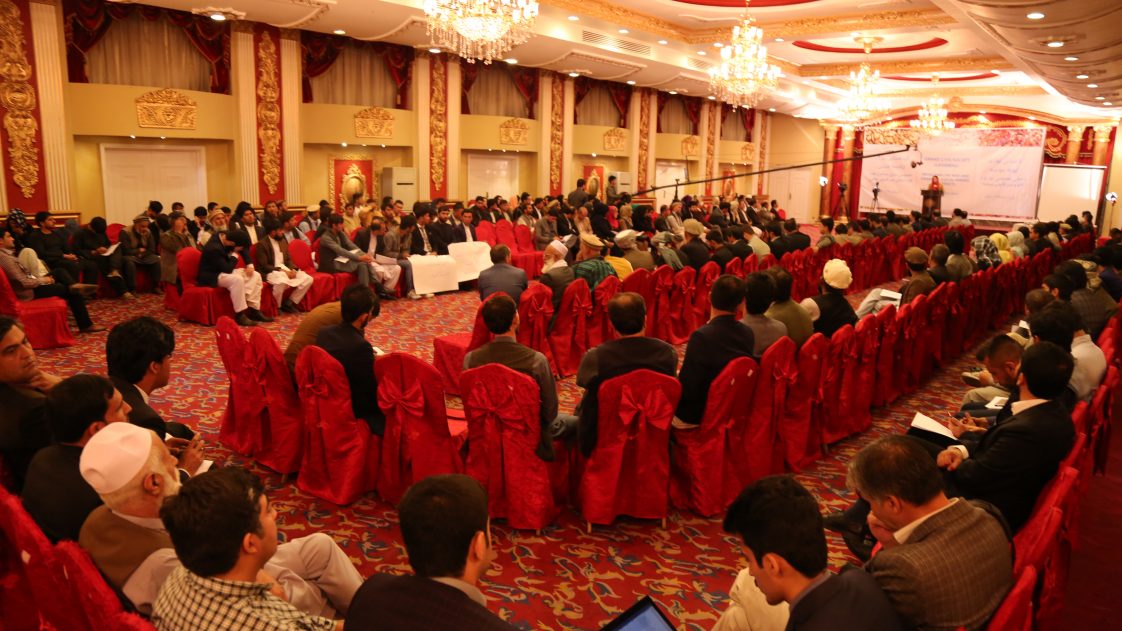 Saturday, October 13, 2018 – KABUL: In a rare show of unity, representatives from hundreds of organisations and civil society activists on Saturday called upon the Ghani administration to immediately scrap recently-signed contracts for the exploration of gold and copper deposits in northern Afghanistan.

On October 5, the government awarded two major copper and gold exploration contracts to joint ventures owned by Centar Ltd, a company founded by Ian Hannam, a former chairman at JP Morgan, and Afghan Gold and Mineral Company (AGMC) owned by former Minister of Urban Development Mr. Sadat Mansoor Naderi to extract gold in Badakhshan and copper in Sar-i-Pul. The contracts were awarded despite clear violation of the mining law that requires a five-year cooling off period for high-ranking officials including Ministers. Mr. Naderi resigned from his ministerial position only a few months ago.

At a gathering in Kabul, civil society leaders and representatives of more than 200 organisations asked the government to name the individual who violated the mining law and hand them over to judicial organs for signing what they called illegal deals for the extraction of gold in Badakhshan and copper in Balkhab.

In a unanimously passed resolution, participants of the public meeting underlined complete transparency in mining-sector contracts. They voiced grave concern at the management of Afghanistan’s natural resources, especially mineral deposits. Lack of capacity, credibility and leadership, as well as the political approach taken by the government toward major mines were listed as issues of serious concern.

The participants also took sharp exception to unlawful extraction of mines, lack of transparency in big contracts, revenue collection from mines and a near-absence of government’s accountability. The concerns expressed by civil society over the past few years must be adequately addressed, they demanded.

Following is the full text of the resolution:

We ask the government to:

Annex A: Past advocacy for contract transparency

In 2006 and 2014, during the tenure of ex-president Hamid Karzai, most of Afghanistan’s major mines were contracted to big international organisations. However, absent an appropriate setting for governance and given widespread corruption in the mining sector, these contracts eventually ended in a failure. Contracts for Aynak copper mine, Hajigak iron mine, Qura-i-Zaghan’s gold mine, Amo zone petroleum, dozens of medium-sized deals and hundreds of small agreements are examples of apparent failures in this vital sector.

After Donald Trump took over as US president and due to his business-oriented viewpoint of Afghanistan’s situation, his interest in the extraction of major mines increased. The National Unity Government, in official statements, has asked the US to invest in the mining sector and has shown its willingness to sign contracts with US companies.

CSOs pushing for transparency in the mining sector, at a press conference on March 19, set several preconditions for the Afghan government: “Afghanistan’s mine watchdogs want President Ashraf Ghani to implement reforms for bringing about transparency and take steps which guarantee preserving the interests of the Afghan people in mining sector prior to inking huge contracts with the US. Pressures exerted by the US on Afghan government for reaching agreements with American firms is premature and against Afghanistan’s national interests.”

The CSOs also warned the government and its international partners of probable risks: “Trump has spoken of exploiting petroleum in Iraq and people who are close to him — like Erik Prince, the former CEO of Blackwater — have also pointed at grasping the natural resources of Afghanistan as well. We hope these issues are merely to the extent of an expression of personal views. Nevertheless, Afghan people need to be assured in this regard. We want Afghan and US governments to guarantee that no contract us awarded without a proper bidding process and transparency. Afghanistan’s mines could not be a part of political deals between the two governments.”

The CSOs have consistently been tracking changes in the mining sector. They have reached the conclusion that the government has no interest in bringing transparency and fundamental infrastructure to the mining sector. On amendments to the Law of Mines on July 3, 2018, the SCOs said: “The new law of mines couldn’t eliminate corruption and misuse in this sector and couldn’t provide an assurance of protecting the interests of the people.”

Despite these warnings, the government has refused to resolve these key questions concerning the interests of Afghanistan. Instead it has continued with signing in unholy haste major agreements with Afghan, Turkish, American and English companies in violation of the relevant law.

On October 5, 2018, acting ministers of finance and mining signed major contracts for the exploration of Badakhshan’s gold deposits and Balkhab’s copper mine with companies, including the one owned by ex-minister of urban development Sadaat Mansour Naderi and Centar Ltd.. A day earlier, CSOs cautioned the government against the explicit violation of law. But the government took no heed. “National and international CSOs voiced their serious concerns with regard to the two mine extraction contracts — which Afghanistan intends to sign soon — that are also considered a brazen violation of the relevant laws. The Minerals Law prevents ministers from receiving mining contracts for a specific period of time after they relinquish charge.”