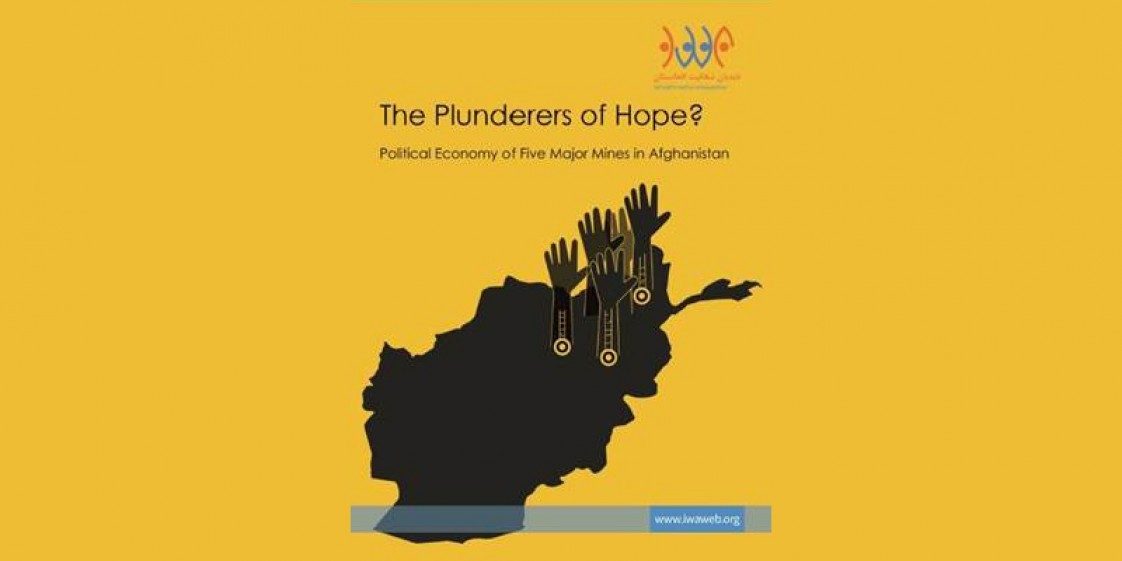 INTEGRITY WATCH: AFGHAN MINING SECTOR IS AT HIGH RISK OF POLITICAL CAPTURE
Tuesday, December 15, 2015-Kabul: Research conducted by Integrity Watch Afghanistan on five major mining operations contracted to various Afghan companies by the Government of Afghanistan, through the Ministry of Mines and Petroleum, has highlighted a number of major concerns regarding (1) the process by which such contracts are awarded, (2) the manner in which such concessions are monitored and (3) the probable loss of a substantial amount of revenue which should have, but has not, accrued to the Government.
The report published today, “The Plunderers of Hope”, focuses on the case studies of five so-called “legal” mines which were licensed by the Ministry of Mines and Petroleum. These case studies highlight the need for greater transparency in the contracting process where political interference and favoritism, more often than not, determines which companies are awarded certain concessions. There are today many members of the Wolusi Jirga, Meshrano Jirga and government officials who have secured mining concessions for themselves or have helped secure them for their relatives or other powerful allies.
Afghanistan is a country rich in mineral resources. The country has substantial reserves of many strategic and precious metals as well as extensive deposits of precious stones. There are sizeable deposits in Afghanistan of platinum, gold, silver, copper, chromite, tantalum, uranium, bauxite and coal as well as deposits of emeralds, rubies, sapphires, and lapis lazuli, to name but a few.
The mining sector is at risk, however, of being captured by a small, politically-influential elite who control a significant proportion of the mining activity in the country, both so-called “legal” mining operations (concessions awarded by the Ministry of Mining and Petroleum) and illegal mining operations. Legal and illegal mining operations costs the Afghan people billions of Afghanis in lost revenue every year. While the vast majority of mining operations in the country are illegal, with no control being exercised over such operations by the Afghan Government, even those mines which are awarded concessions by the Afghan Government (so-called “legal mining” operations) are providing little revenue because of inadequate oversight or regulatory supervision by the Ministry of Mining and Petroleum.
The exploitation of such resources represents an opportunity for the Government to generate substantial revenue to fund the country’s annual budget and to enhance the development of the country’s infrastructure. Development of the mining sector also represents an opportunity to provide employment opportunities and skills training for a large number of people in the country. However, such revenue generation and employment opportunities are being squandered by a regulatory process which actively encourages corruption and the usurpation of economic control over this sector by a privileged few.
Recommendations:
The MoMP needs to amend the Mineral Law. The Mineral Law is weak and does not have the provisions necessary to guard against corruption. Civil society should be consulted and their recommendations should be taken into consideration.
The Government needs to recentralize the licensing system for precious minerals. The former minister’s plan to decentralize the licensing system to provincial mining departments has led to massive corruption and secrecy, without any resulting revenue coming to the Government.
It should be mandatory for bidders to disclose the beneficial ownership of each company tendering for a concession, as well as all of its shareholders. This is essential to avoid he hidden owners, shareholders or beneficiaries, including senior government officials and members holding political leadership positions.
The bidding process for concessions should be transparent and the tendering, short-listing process, bid evaluation process and negotiations should be carried out by a team of experts with clear benchmarks and accountability, immune to political interference.
The MoMP should, in consultation with international experts and representative of civil society, prepare model contracts which should be applied on a consistent and uniform basis to all new concession awards.
There should be clear definitions of various activities in the mining sector (eg., exploration versus exploitation) and companies need to be regularly monitored as to whether their activities conform to the activities stipulated in their contracts.
The Ministry of Finance (MoF) and the Ministry of Mines and Petroleum (MoMP) should develop a joint mechanism for collecting revenues from each company which is undertaking mineral extraction.
The Customs Department of the MoF should be provided a copy of each mining contract and should be charged to track the exports of each company so that these can be cross-checked against contractual requirements.
The MoF and MoMP should work on developing a mechanism to project the revenue expected from each mine (according to the contract provisions) and monitor actual collection of revenue.
Publication date: December 15, 2015
Integrity Watch Afghanistan
Kabul, Afghanistan
www.iwaweb.org
+ 93 (0) 0780 942 942 info@iwaweb.org
About Integrity Watch Afghanistan
Integrity Watch is established in 2005 and since 2006 work as an Afghan civil society organization committed to increase transparency, accountability, and integrity in Afghanistan.
Integrity Watch Mission
The mission of Integrity Watch is to put corruption under the spotlight through community monitoring, research, and advocacy. We mobilize and train communities to monitor infrastructure projects, public services, courts, and extractives industries. We develop community monitoring tools, provide policy-oriented research, facilitate policy dialogue, and advocate for integrity, transparency, and accountability in Afghanistan.